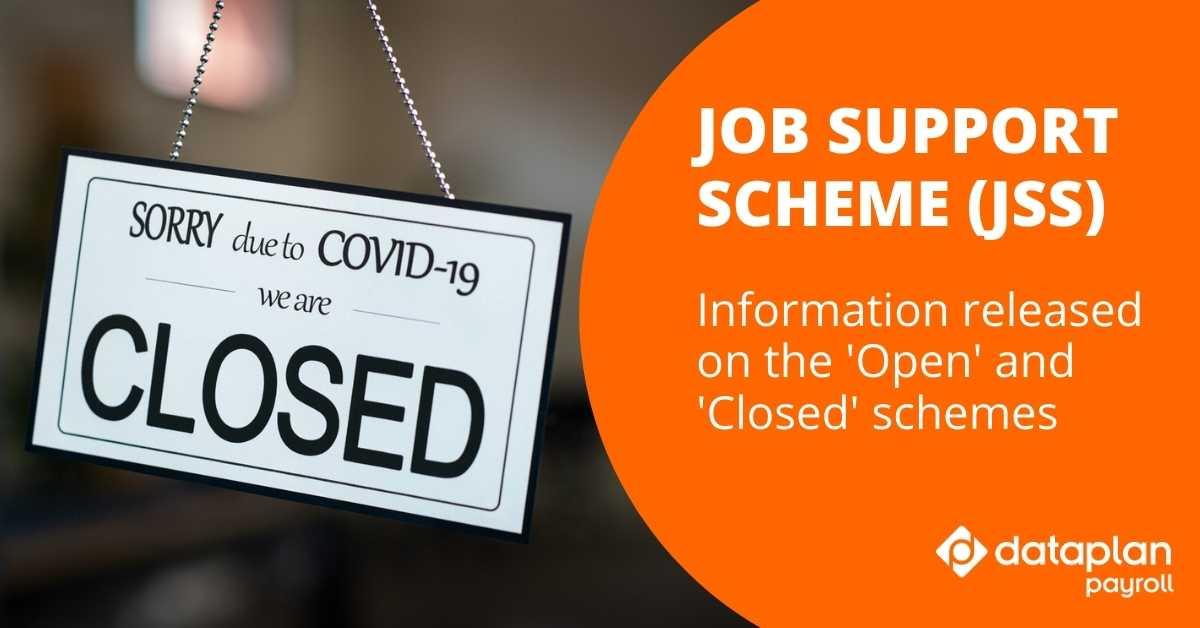 On the 22nd of October further guidance on the new Job Support Scheme (JSS) was finally released on gov.uk. As we mentioned in our previous post “What we know about the Job Support Scheme and Job Retention Bonus so far”, there were many details that were left to be clarified up until this point.

Whilst some details remain to be revealed, we now know that there will effectively be two schemes; JSS Open and JSS Closed. There are some similarities between the two, but it is important to note that they are different.

The JSS Open scheme is for employers who are able to remain open (meaning that they are not affected by closure, lockdown or restrictions and legally required to close down) but may be open with reduced hours or staff numbers.

Originally, the Chancellor advised that employees would have to work a minimum of 33% of their normal hours to qualify under the scheme, however it is now more generous.

The key details on the scheme are:

The JSS Closed scheme is for employers that are legally required to close as instructed by the Government.

The key details of this scheme are:

How are the schemes similar?

The schemes are similar in a number of ways. There is some eligibility criteria which applies to both of the schemes:

What about employers in receipt of Public Funds?

For employers who have their staffing costs funded fully from the public purse, they will not be eligible to claim under either the JSS Open or the JSS Closed scheme.

Employers that rely on a combination of public and private funds to cover their staffing costs are advised to contact their sponsor departments or respective administration, for example the Department of Education. For those who are eligible they will claim using the same process and calculation.

How does the Financial Impact Test work?

As stated, employers with over 250 employees on their payroll will be required to undertake a Financial Impact Test to decide whether they will qualify to claim under the scheme.

For VAT registered businesses this test will be based on:

What do we know about how JSS claims will work?

We know that claims can be made from the 8th of December 2020 for November salaries, following a similar pattern for subsequent months. April claims (which will be the final month of the scheme) will need to be made in May. HMRC will check the claims, as they have done for CJRS, looking for fraudulent and incorrect claims.

Employers claiming the JSS are also able to claim via the Job Retention Bonus (JRB) scheme if they are eligible to receive the bonus.

What do we know about JSS calculations?

So far guidance has only been released on the open scheme, guidance for the closed scheme is expected to be released by the end of October.

For variably paid employees the reference salary is the greater of:

As was the case with the CJRS, the JSS Open and Closed schemes require the establishment of employee’s usual hours.

For employees with fixed hours, the calculation is based on the greater of:

For employees who work variable hours, the usual hours are calculated as the greater of:

The calculation must include hours paid as annual and statutory leave, and cannot be altered if the employee is expecting to work more or fewer hours in the future.

For employees who are paid on ‘piece work’ or ‘per task’ whose hours cannot be calculated this way, hours can be estimated based on the number of ‘pieces’ produced and the average rate of work per hour.

Guidance expected at the end of October

Further guidance was expected at the end of the month which will hopefully clarify the remaining questions including:

As soon as we have further details we will share what we know. It is all getting very close to the claim date, however and it is disappointing that there is still no clarity on some of the necessary claim processes. It feels like CJRS all over again!